If you’ve ever watched behind-the-scenes footage of a superhero movie or animated feature, you might’ve had the magic of movies ruined for you by a bunch of actors standing in front of a green screen wearing glorified Halloween costumes. Indeed, neither the glow emitting from Kylo Ren’s lightsaber nor the Incredible Hulk exists in the real world.

But in exchange for a part of your childlike innocence, you got an insightful look into the work of visual effects artists. These are the folks who take the raw footage filmed on site and transform it into something new entirely—a real-life fantasy playing out in front of the audience.

So… let’s just get right into it. Those de-aging special effects used on Robert De Niro, Joe Pesci, and Al Pacino. They were something, huh?

At best “pretty good” and at worst “very distracting,” the decision to use CGI to make the trio of septuagenarians look about half their respective ages was one of the most talked-about calls in filmmaking this year. But the sheer scale of the effort to de-age the three main characters of the movie for a significant amount of time makes The Irishman a worthy contender. Plus, the effects clearly didn’t detract from the movie overall—The Irishman currently sits at 94% on Metacritic and 96% on Rotten Tomatoes.

While audiences loved the movie, tons of people found the de-aging effects more distracting than not. ILM made the trio look younger, but couldn’t do anything about their movements. You could tell, pretty plainly, that the actors were still senior citizens underneath those visual effects. But alas, it was the first time effects like these had been done at a scale like this. Gotta start somewhere.

Though it performed well at the box office, the 2019 photo-realistic remake of Disney classic The Lion King received mixed reviews from critics and audiences upon its release. Many complained that the most realistic visual effects in this remake detracted from the energy and charm that made the original animated film so special.

But nevertheless, the visual effects were stunning. It was hard to believe that you weren’t looking at real animals on the screen. The Moving Picture Company, a British visual effects and production company, provided the visual effects for The Lion King. Its work comes two years after MPC won the Visual Effects Oscar for a similar remake of The Jungle Book.

MPC animated the movements, muscles, eyes, facial expressions, and breathing for more than 30 species of animals, and they did it by hand. The safari environment was created entirely using CGI. There is only one real, non-animated shot in the entire film: the sunrise in the opening sequence.

Set in World War I, 1917 follows two British soldiers on a life-threatening trek across No Man’s Land to relay the message that another battalion’s planned attack is a trap. Failure to reach their destination would result in the death of 1,600 men, the brother of a messenger among them.

Another film featuring visual effects from MPC, 1917 is unique in that the movie is filmed to appear as if it’s shot in a single take. That meant a lot of the moviemaking crutches frequently used for VFX purposes, like cutting away from an explosion to show another character’s reaction and then back to show the smoldering wreckage, couldn’t be used here.

“VFX is all about fooling the audience, through the quality of the computer graphics, the movement and the perception of reality,” says Guillaume Rocheron, VFX supervisor for 1917. “As soon as you have a cut, your brain resets—but in our case, you can really study everything. Your brain has time to look at things and analyse them, especially in IMAX format.”

Sustaining that illusion for 10 seconds is impressive, let alone the two-plus hours that the VFX artists had to trick 1917’s viewers.

Star Wars: The Rise of Skywalker

The final episode of the nine-film “Skywalker saga,” The Rise of Skywalker brings closure to one of the most legendary stories in cinematic history. Skywalker’s nomination marks five consecutive years that a Star Wars film has been recognized in this category. None, however, have been winners. Perhaps Skywalker will reverse the trend?

ILM, the same studio that did the effects for The Irishman, worked on Skywalker. Aside from the massive scale and spectacle of any Star Wars movie, one of the biggest challenges the visual effects team faced was weaving Princess Leia, played by the late Carrie Fisher, into the story. ILM brought her back using recycled footage from 2015’s The Force Awakens, the last Star Wars movie she filmed. Director JJ Abrams insisted that the character be genuinely “authored by Carrie Fisher,” rather than by a digital recreation.

You may have noticed a repeated name here: visual artist Dominic Tuohy earned a double-nomination in the category this year. He worked on the teams for both 1917 and Skywalker, marking the first time a VFX artist has been nominated twice in the same year since John Frazier in 2007.

The culmination of the beloved, boldly expansive 22-film cinematic story, Avengers: Endgame became the highest-grossing movie of all time, passing 2009’s Avatar in July. Endgame follows the superhero collective’s battle for the future of the universe against all-powerful Thanos and his evil army.

In terms of scale, no other movie in the category can come close to the visual effects of Endgame. Obviously, to depict superheroes with powers and the destruction that those types of people may cause in the real world, a number of CGI effects are needed. Additionally, non-human characters like Hulk, Thanos, and Rocket were CGI-ed the entire time they were on screen.

While most of the visual effects in Endgame are digital, not all of them are. Chris Hemsworth was stitched into a physical suit each day for his portrayal of Thor on a bender. Some of the “flying” was accomplished physically, using wires to hoist the actors into the air.

Endgame is the third Avengers movie to be nominated in this category; only Age of Ultron was snubbed. But will it be the first to win? We think it deserves to be—one last feather in the cap for Marvel’s ambitious finale. 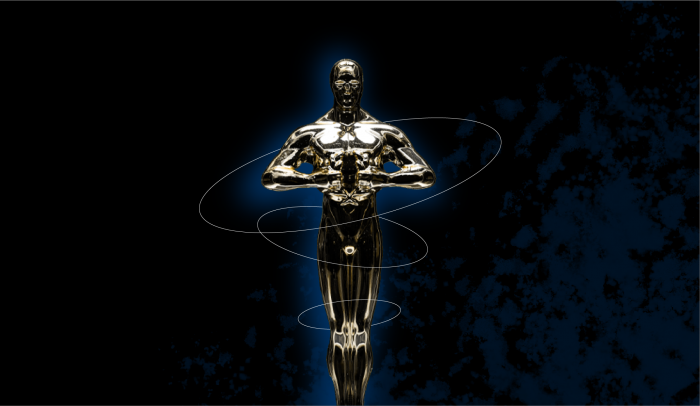 A Creative’s Guide to the 2020 Oscars: Best Cinematography

A Creative’s Guide to the 2020 Oscars: Best Animated Feature

A Creative’s Guide to the 2020 Oscars: Best Production Design