Ever felt like just turning on your camera for your sixth consecutive Zoom meeting might just make your head explode? When Jim from finance asks if everybody can see his screen at 8:30 in the morning, does it turn your normally sweet, considerate self into the Incredible Hulk?

Hey, it’s not just you, and you should know that feeling has a name: digital fatigue. According to Dr. Alexander Aizman, a visionary physician and surgeon, digital fatigue is the “physical discomfort that is experienced after prolonged exposure to a digital screen such as a laptop, computer, mobile phone, e-reader, or tablet.”

As we stare at screens for longer—the average daily time spent with digital media is approaching eight hours, compared to six in 2018—that fatigue increases. And it’s increasingly falling on the designers of those screens to find ways to minimize it. What’s the best way to create online content that people want to engage with… when people are fatigued by online content?

But first, let’s get into the real reason for digital fatigue

Be sure to let your boss know: Video conferencing is bad for you. According to researchers at the Stanford Virtual Human Interaction Lab (VHIL), there are four key psychological explanations for why long video chats are particularly exhausting. They are:

In other words, it makes us feel like we need to be on for big chunks of our days. “Video chatting forces us to focus more intently, reduces natural silences, and creates a more intense feeling of being watched,” wrote Jon Fee and Devi Thomas, marketing leaders for Salesforce’s social impact center.

And according to Jeff Hancock, the founding director of the Stanford Social Media Lab, recognizing that video-chatting is cognitively taxing is the first step toward better integrating this changing behavior in our daily lives. “When we first had elevators, we didn’t know whether we should stare at each other or not in that space,” Hancock said. “We had to evolve ways to make it work for us.”

How to design for digital fatigue

How should creatives respond to this cognitive overload and general screen exhaustion? While there’s no foolproof way to design something that’s gentle on the eyes, clean and usable designs that still satisfy users might be most effective for the digitally fatigued. Walls of text can make a fatigued audience’s eyes glaze over, but simple graphics with easy-to-understand takeaways can make important information easier to grasp. Simply put, digital fatigue is just another reason to not do lazy, uninspired design.

Legendary industrial designer Dieter Rams codified the components of good design, and although “digital fatigue” wasn’t a thing in the 20th century, his rules aged remarkably well. A few of Rams’ 10 heuristics are especially applicable for designing in the era of digital fatigue:

In the era of digital fatigue, Rams’ heuristics of good design are now more important than ever. Making honest, long-lasting and unobtrusive digital products is going to be an essential part of making sure you don’t fatigue your users.

Collectively, we seem to be reaching our digital capacity—that’s an issue that indiscriminately affects every industry. Jacky Li, a product designer at the product development firm Connected, explains in a blog post that reaching mental capacity has a lot to do with user behavior, and in particular, the difference between automatic and reflective behaviour. Waking up, rolling over, and checking Instagram likely falls into the category of habitual, automatic behavior. But then there’s reflective behaviors, which are exploratory actions the mind takes when it’s doing something new. This category, as you might be able to imagine, takes a lot more energy and effort. 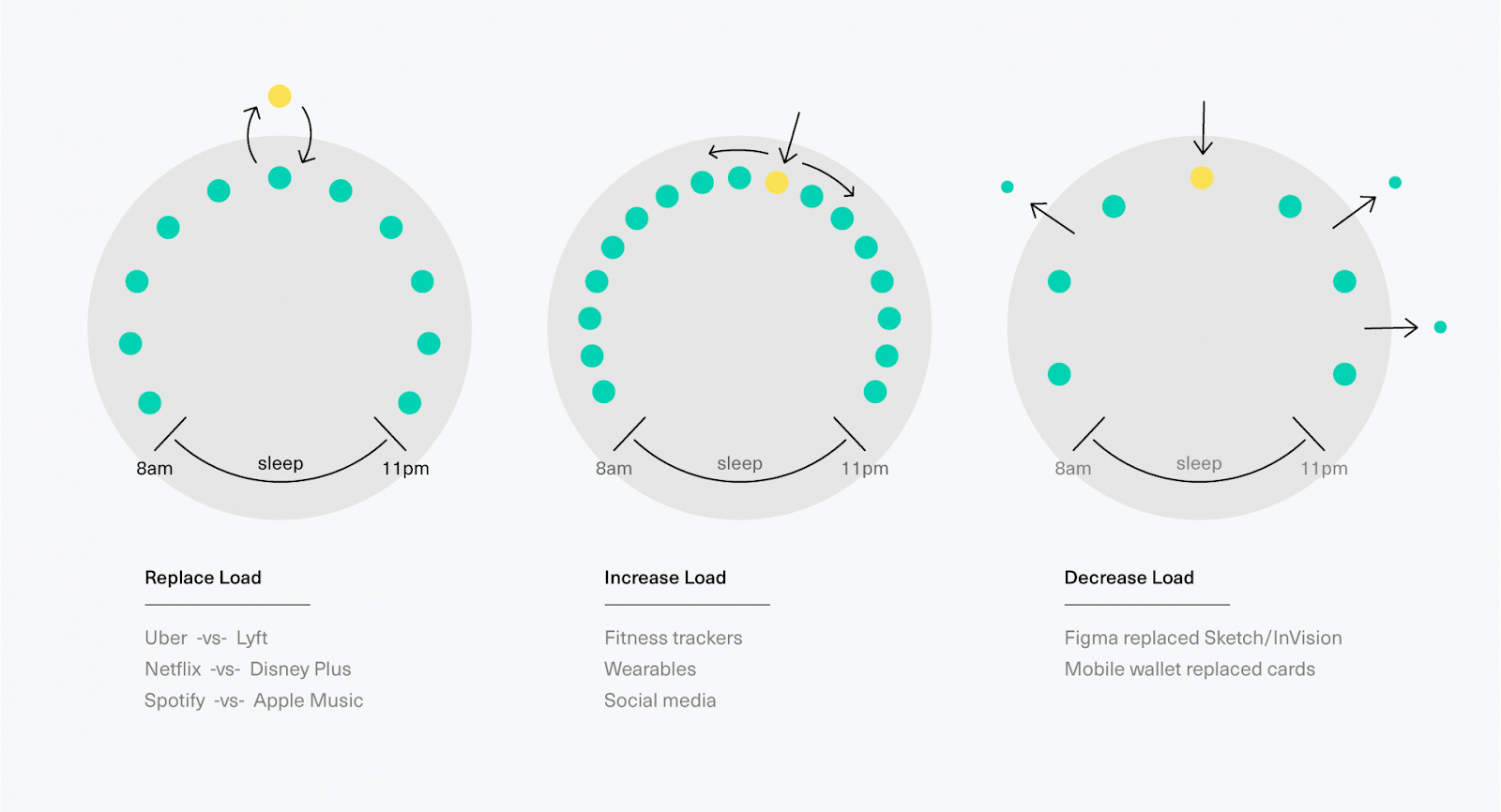 A visual understanding of digital capacity, via Jacky Li

Li is a product designer, but his thinking around this applies to all creatives: “When releasing a new product, it’s important to think about your target audience’s cognitive capacity for what you are building, not just their desire for it,” he writes. And as such, there are effectively three things your product can do: replace load, increase load, or decrease load.

Now, when it comes to content, you’re almost always operating in a “replace load” paradigm; if your audience isn’t interacting with your content, they’re likely interacting with someone else’s. Still, the notion of cognitive load can help guide creatives toward the production of content that goes beyond being personalized, and is genuinely empathetic—creating connections with readers, users, and viewers that is ultimately helpful rather than tiring.

The long-term impact on design

For the past year, all design has been digital—and while that isn’t going to stop anytime soon, it’s worth wondering whether our growing understanding of cognitive overload will have an impact on how creatives make in the future.

““Videoconferencing is a good thing for remote communication,” said Jeremy Bailenson, the director of the VHIL. “But just think about the medium—just because you can use video doesn’t mean you have to.”
Perhaps the DIY trends in digital design—and our collective fondness for risographs, zine culture, and collage—speak to our hunger for other forms of media, media that don’t have as primal a place in our current digital culture. But maybe just because we can use a particular in-your-face method of marketing or a particular technology to create an experience, doesn’t mean that we have to. Maybe sometimes simple, and analog, is better for the brain.

Back to Basics: What is Graphic Design?

A Designer’s Guide to a Productive Quarantine

Designing for Disaster: How Powerful Visuals Can Keep Communities Safe During a Pandemic